so, 😉
got yesterday my „NodeMCU V3“ IoT-module->approx..2,60€ Aliexpress/Ebay/Bangood etc..
really freaky/whacky 😉 ..
i just tried something out; have to wait here for other things/“items“ 😉 to come..
It has a full 802.11 b/g/n WLAN onboard and can fully work as a webserver; its much faster than an Arduino and has also programmable GPIO-pins..
and u can fully use the Arduino-IDE..
anyway, wrote a little sketch, can now access to it via Wlan and can select the source and the different-filter on the ES9038Q2M..
u can also use some HTML-Slider to adjust maybe the onboard HW-Volume-Control (and then via some digi-poti->http://essabre-90xx-rpi.sfb2.com/2018/02/es9038q2m-project-2-building-a-bt-controlled-hw-volume-control-digital-pot-10kohm-mcp4131/)..
but originally i wanted to control our lovely „DIY-DAC“ via Bluetooth; but a web-interface could also be an (additional) option..
so only some „tech-demo“-pics..
(but this NodeMCU is really,really freaky „stuff“ 😉 )
(i could here only test two filter right now :“BrickWall“ and „minimum phase fast roll-off“ and i must say to my degrace: i´ve heard no difference 😉 (but could be also a wiring-problem; have to evaluate more)(but tested it via Jumper some weeks ago and „Minimum-Phase-Slow-Roll-Off“ and „Linear-Phase-Fast-roll off“ looks the most promising (for me))..
but i will test it more… 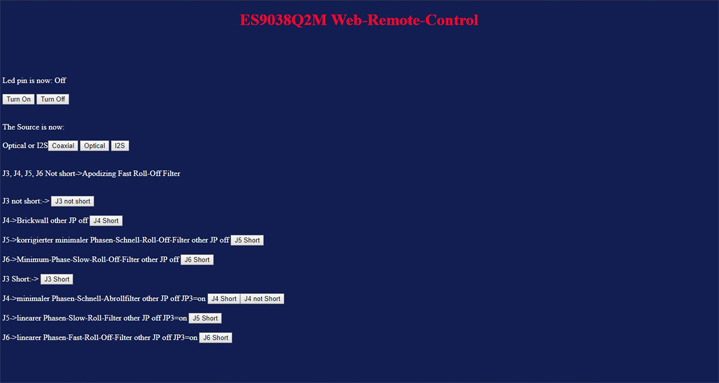 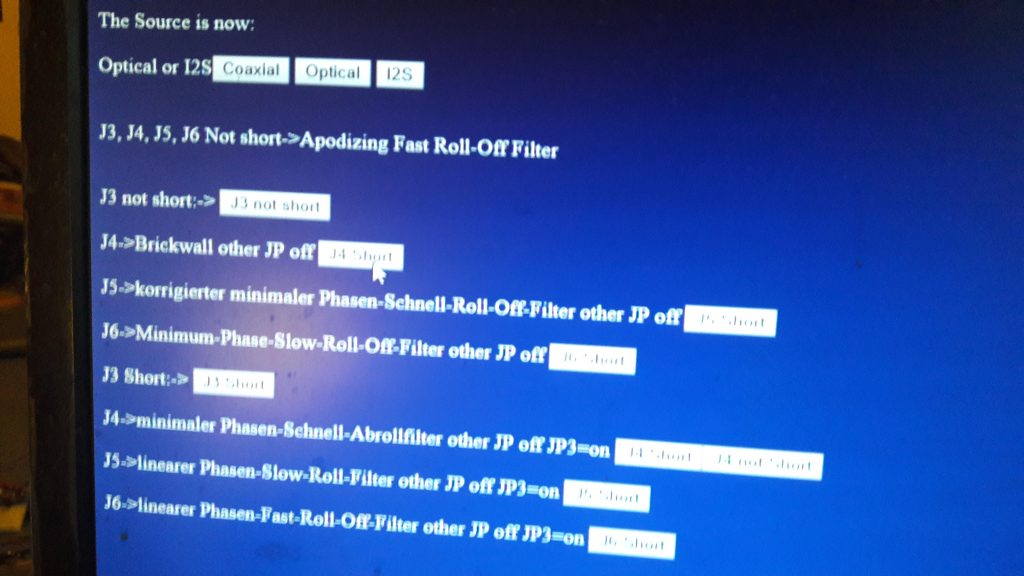 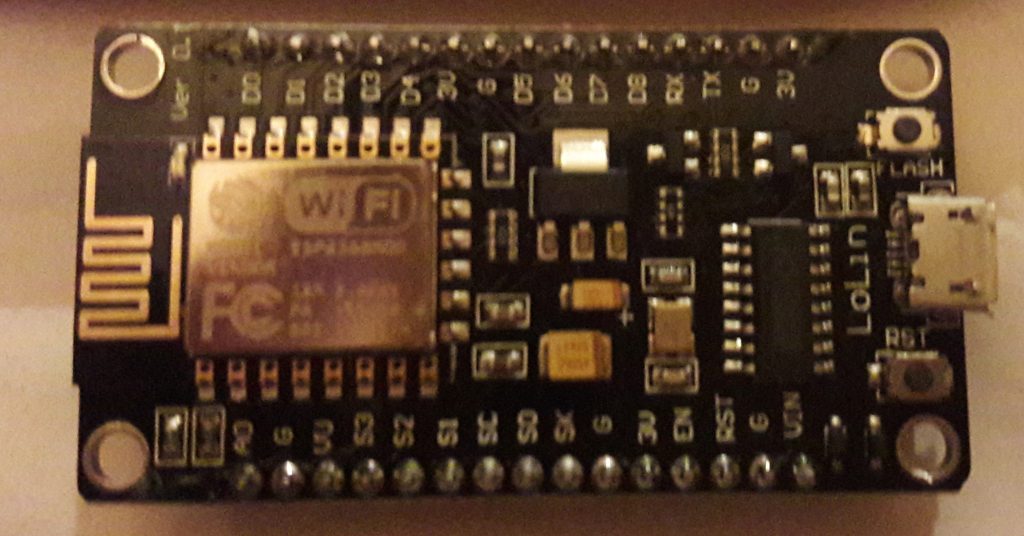 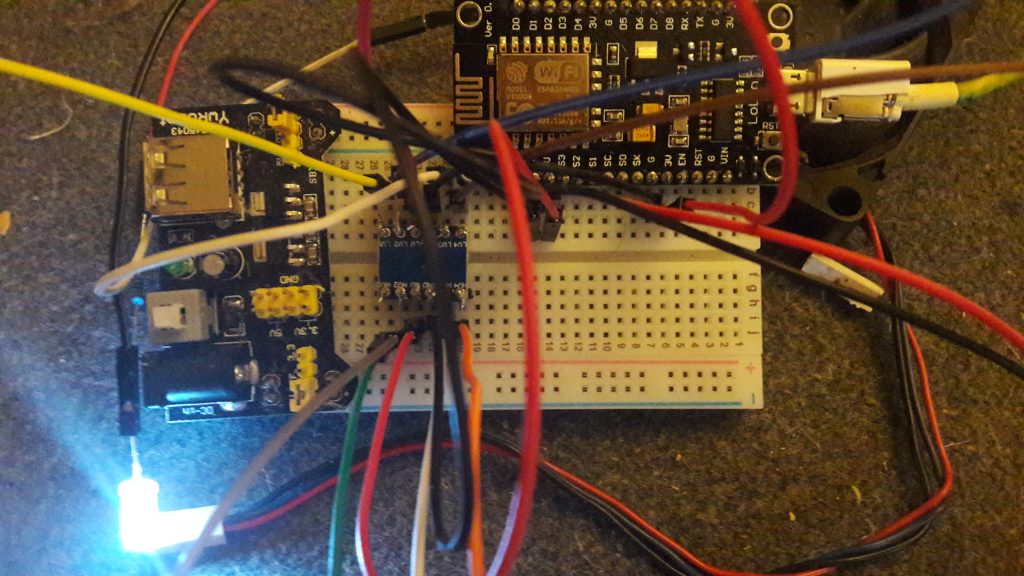 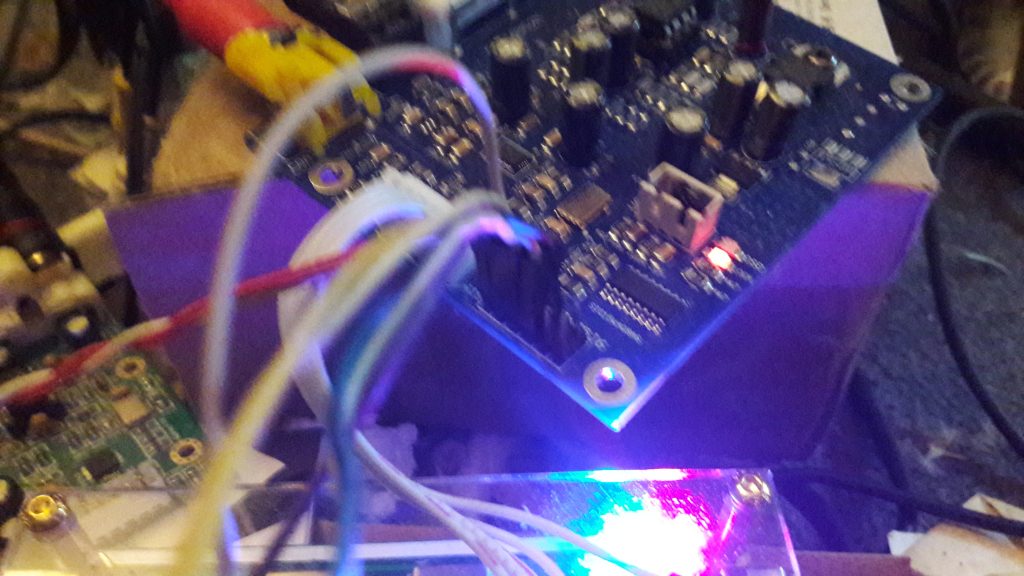 and so, 😉
we are now here again with a main „Hi-Fi“-theme/problem:
„Clean-/clear-/power“ and Power-Supplies“ 😉 ..
It´s all about the right-/clean power, voltage-regulator-/stabilizer..
i´m very often in this very good forum concerning all these electrical things/also concerning the ES9038Q2M->
http://www.diyaudio.com/forums/digital-line-level/314935-es9038q2m-board-38.html
so, and i came again to this subject (matter), cause i had/these „stuttering“-problems again with the Skysong-/Singxer-USB-bridge+the ES9038Q2M..
first i thought it´s mainly a driver problem but meanwhile i guess it could also be a power-supply problem->5V on the USB-bridge via USB !! (500mA); could really be a problem(-„stable-wise“)..
I came by it because i (try to) made a DIY-power-supply with a 32V-HP-power supply for some printer + a cheap „Step-down-power regulator/supply“ from Aliexpress->
http://essabre-90xx-rpi.sfb2.com/2018/01/diy-make-your-own-15v-dc-power-supply-for-es9038q2m-or-other-the-cheap-way/
it had 625mA and i thought this should be enough cause i´ve read elsewhere that the ES9038Q2M only needs roundabout 200mA..
I connected my ES9028Q2M with this regulator and (adjusted it down to 15V) to my raspberry and got a horrible, horrible stuttering !!
thought first it was a software-problem but wasnt..asked some user in the forum and they told me that some power-supplies may become „unstable“ with/on „low-load“..
anyway this brings my again to the above „topic“ and now i think i better use a 5V-stand alone-power supply with minimum 1A for my USB-bridge (the Skysong-/Singxer have the possibility via a barrel-jack)..
by that i´ve ordered some other 15V-power supply with „stable“ 2A for the ES9038Q2M..
where we so come back to the main „theme“: Dual 15V for the ES9038Q2M and power-supplies in general..see above 😉 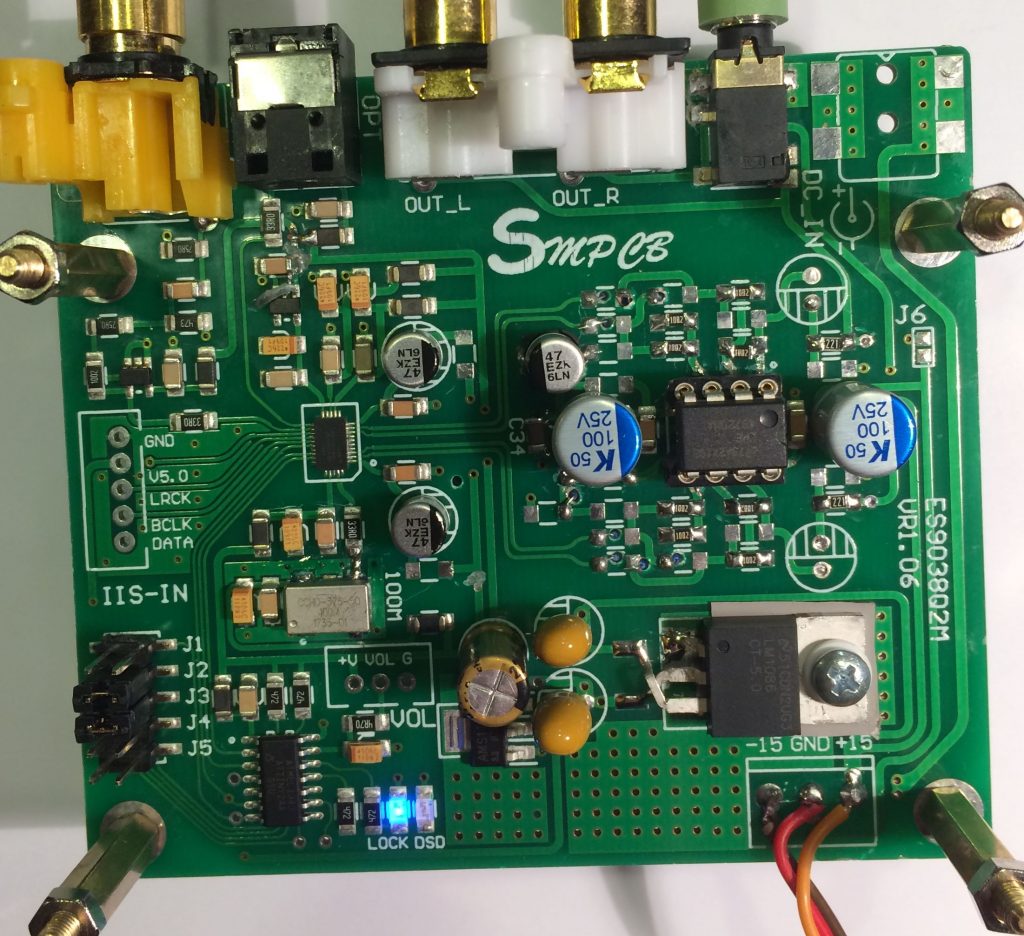 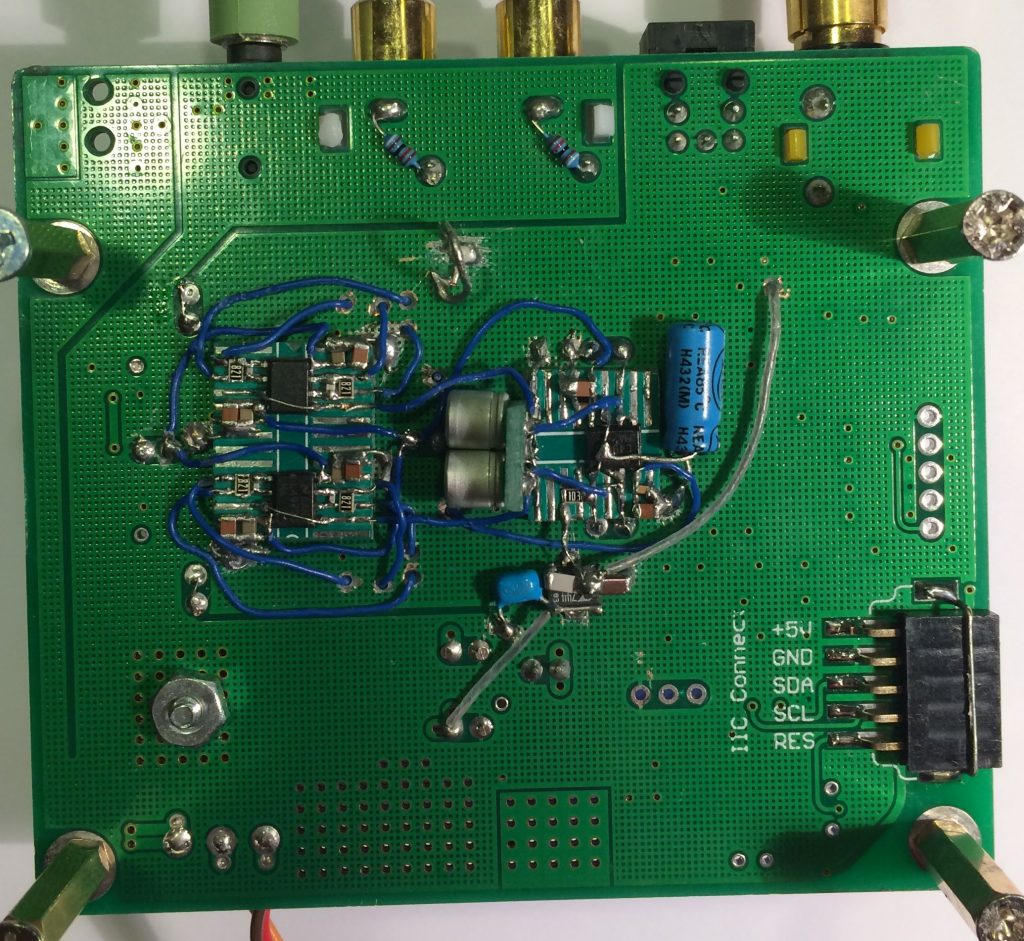 (the pictures are from „Markw4“ from the above mentioned forum; hope i can use them here, there are just to „illustrate“; if not please some e-mail)

so, 😉
came by chance about this facts/post in this very interesting forum->http://www.diyaudio.com/forums/pc-based/302687-es9018k2m-es9028q2m-9038q2m-dsd-i2s-dac-hats-raspberry-pi-17.html
„iancanada“ posted:“..ES9018 and ES9028 need the small DoP daughter board (which can be plugged in the IsolatorPi) to convert the DoP stream into DSD. However ES9038Q2M has a built in DoP decoder, so, for ES9038Q2M, the DoP daughter board is not a must.“,
+“ESS9018/28/38 has internal 32bit digital volume control. Much better than any 24bit digital volume control, but still not as good as the analog one on my PASS XP-10. However according to my listening experience, the difference is not that huge.“.. 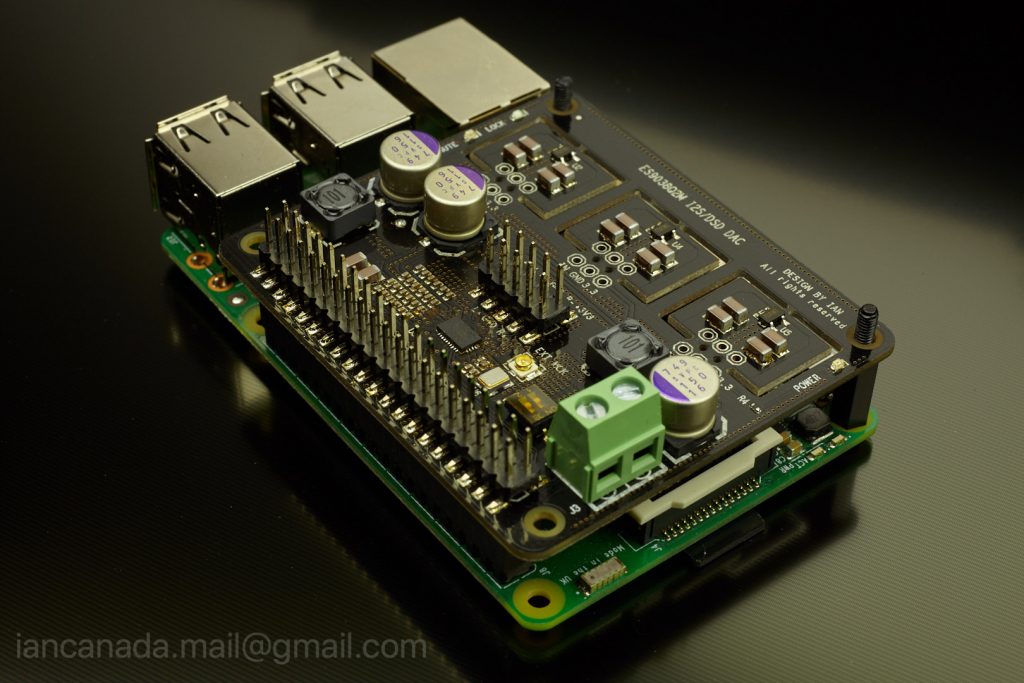 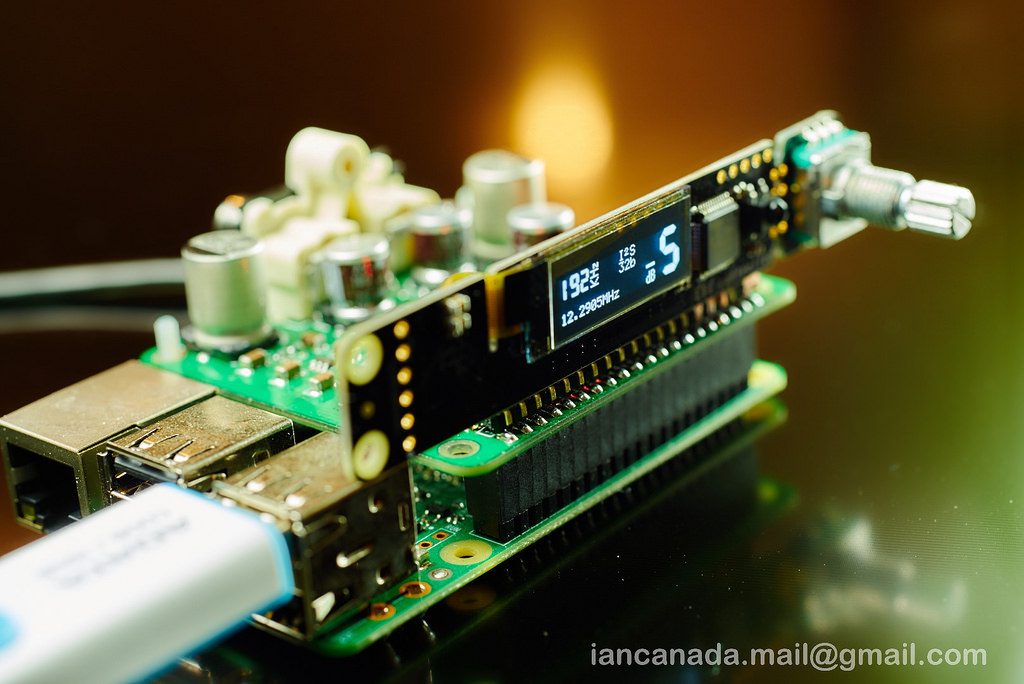 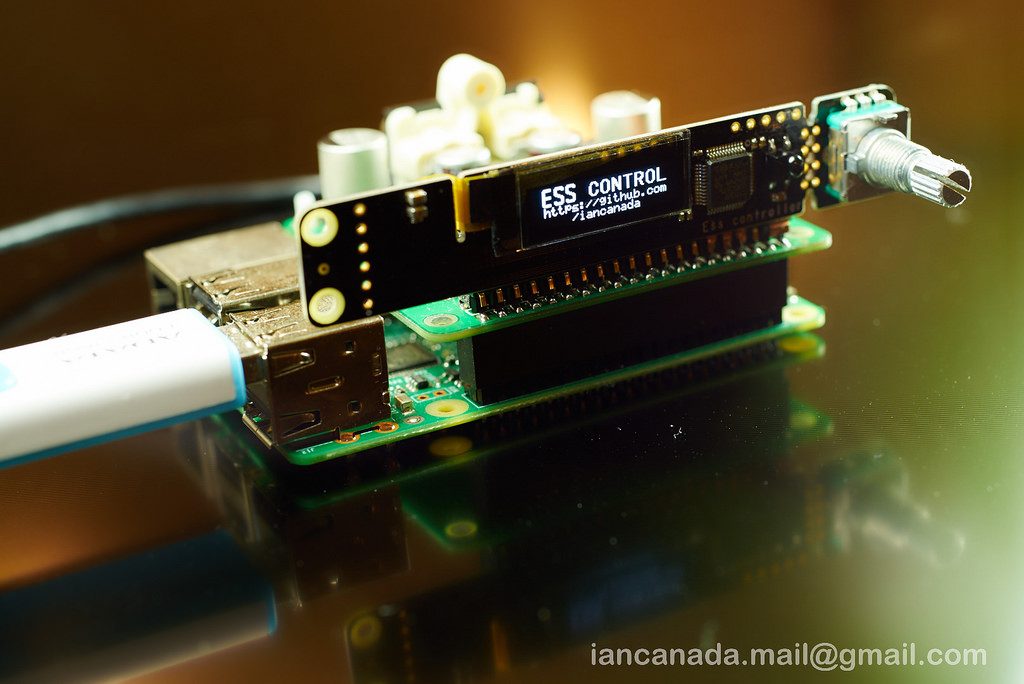 by that his „ES9038Q2M DAC HAT“ looks very fine, neat and „sophisticated“ 😉 ; mail him..😉
(also very interesting other (DIY-Audio) projects there !! ->https://github.com/iancanada) 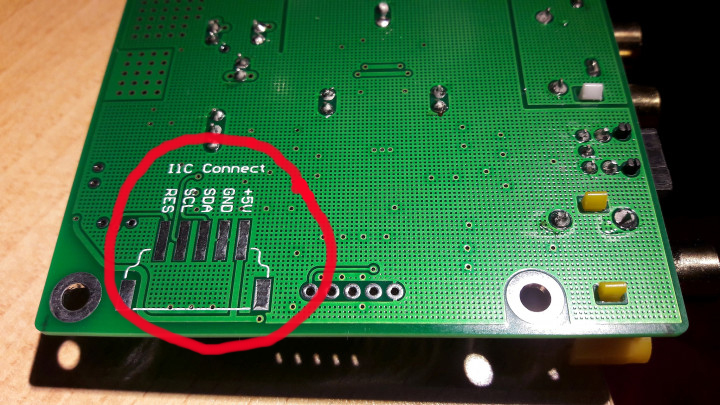 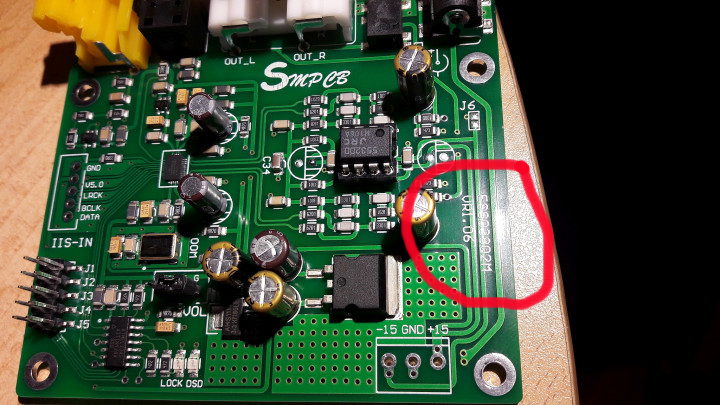 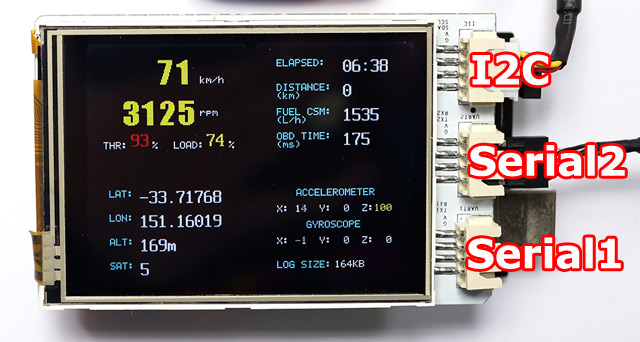 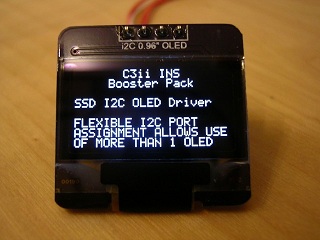 try at present to test out some libraries for this..

so, 😉
sorry, i´ve just seen that it was impossible for unregistered user/guests to see any content in the forum->forget to uncheck „Force Guests to register/login to access the full content„(it was, as i hardly remember, because of the f***** spam-attacks); its solved now..->FORUM
second i´ve made a new post how to change the „identifier/baudrate/pin“ of a HC-06-BT-module->http://essabre-90xx-rpi.sfb2.com/forum/showthread.php?tid=34
third i´ve updated to „DietPi 6.4„->http://dietpi.com/ and it plays here soo very well with my „ES9028Q2M“->absolute wonderful..(just connected 2 DIP-buttons via a breadboard to the 8 pin HW-control on it..); soo nice..(i will also try in future to solve/control it via some BT/Arduino-control)
fourth i´ve installed/set up a „search„-widget in the upper right..thought it was already there but wasn´t 😉 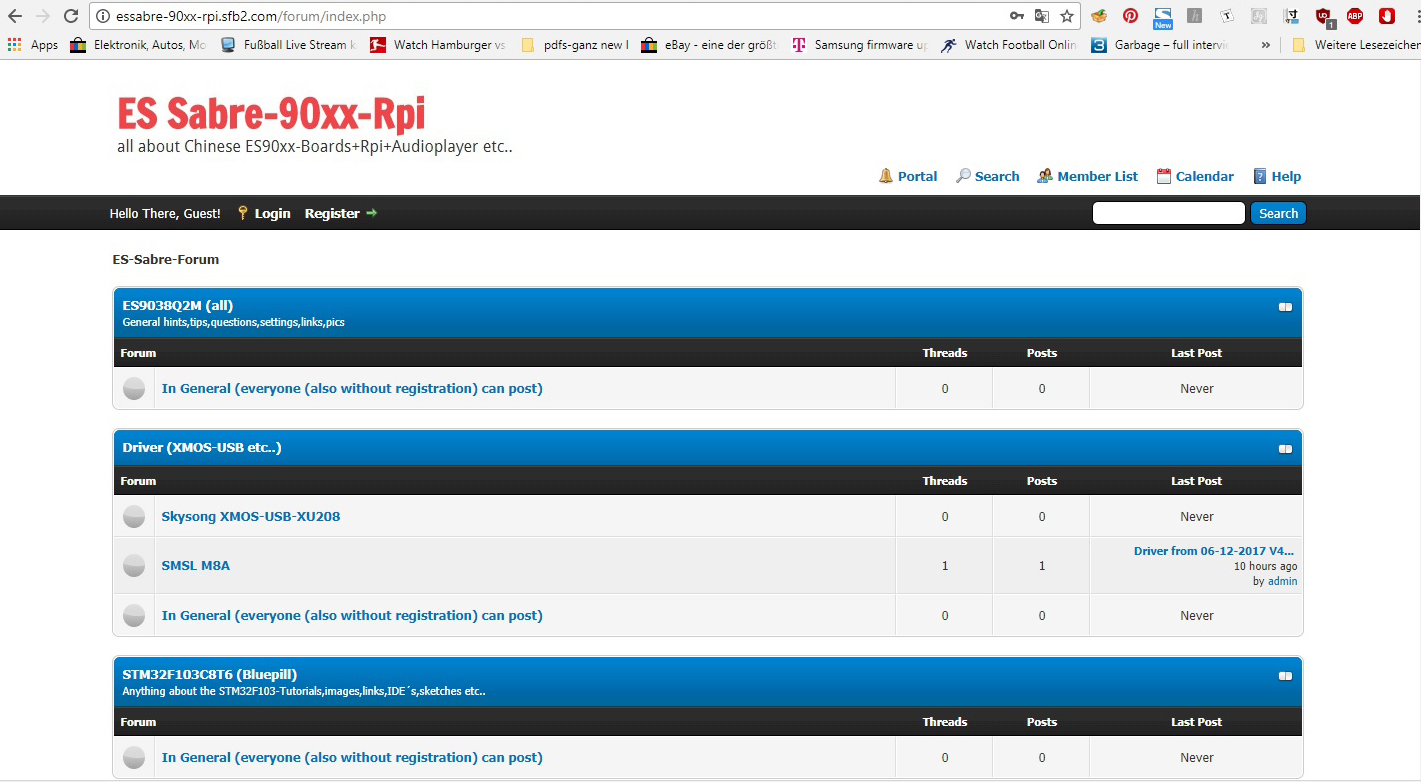 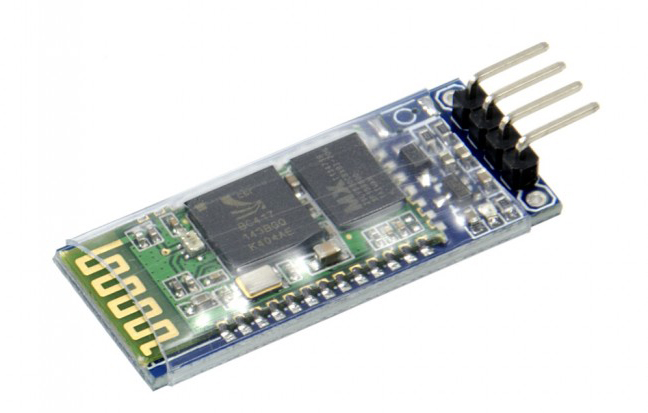 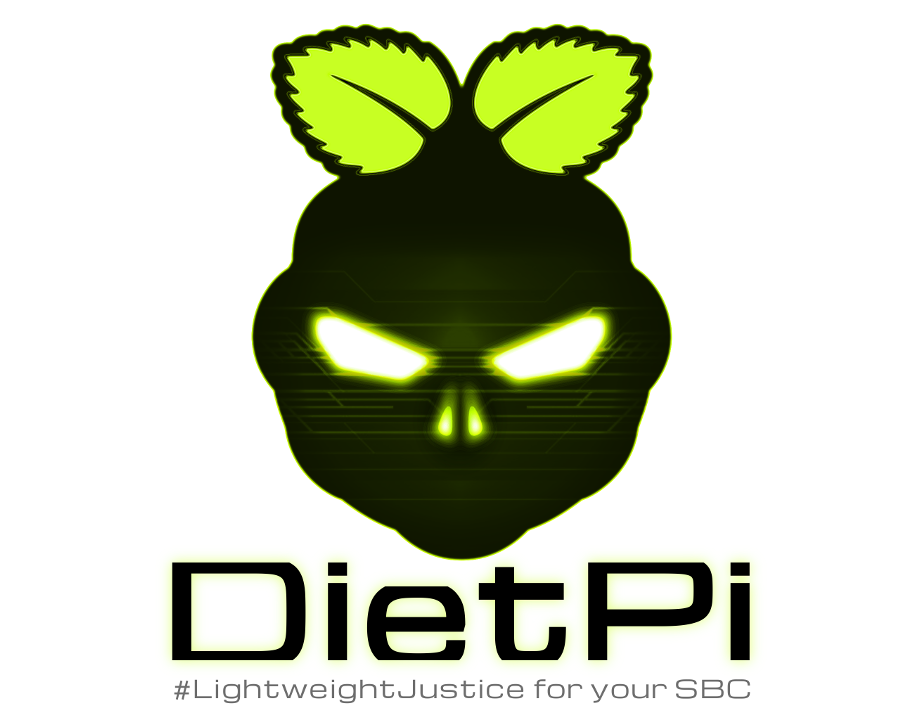 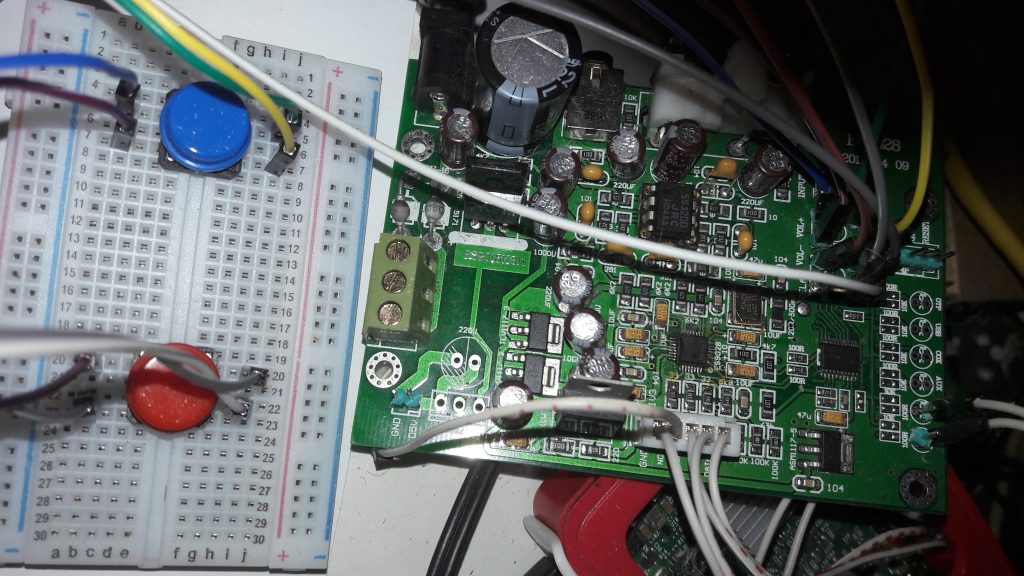 (i will try to use some bitmaps/icons in future (like in the hifi-duino-project) but at present its really difficult for me to „include“ them/set them up in the sketch, also because of the very low ram-resources on an arduino (on a NodeMCU v3 for example u have up to 32MB flash and not max 256kb!! like on an Arduino (Mega2560))-there are some ways to optimize it, but for now i´m glad to got it to work at all 😉 )

so, 😉
because „Krunoslav“ (again 😉 ) send us a link „Foobar 2000 for Dummies (Part 2) – Playing DSD – New SACD plugin“->https://diyaudioheaven.wordpress.com/digital/pc-software/foobar-2000-for-dummies-part-3-new-experimental-sacd-plugin-v-0-9-x/
i updated my Foobar2000 to the latest SACD-Plugin+DSD Soundprocessor (V1.10->https://sourceforge.net/projects/sacddecoder/files/foo_input_sacd/) and followed some steps to set it up..
so, first: got it to work !! but only at present here via DoP (352k) with the Skysong(Singxer)-USB-bridge+ES9038Q2M (via I2S)..(it doesnt matter for me that it isnt DSD-nativ right now): 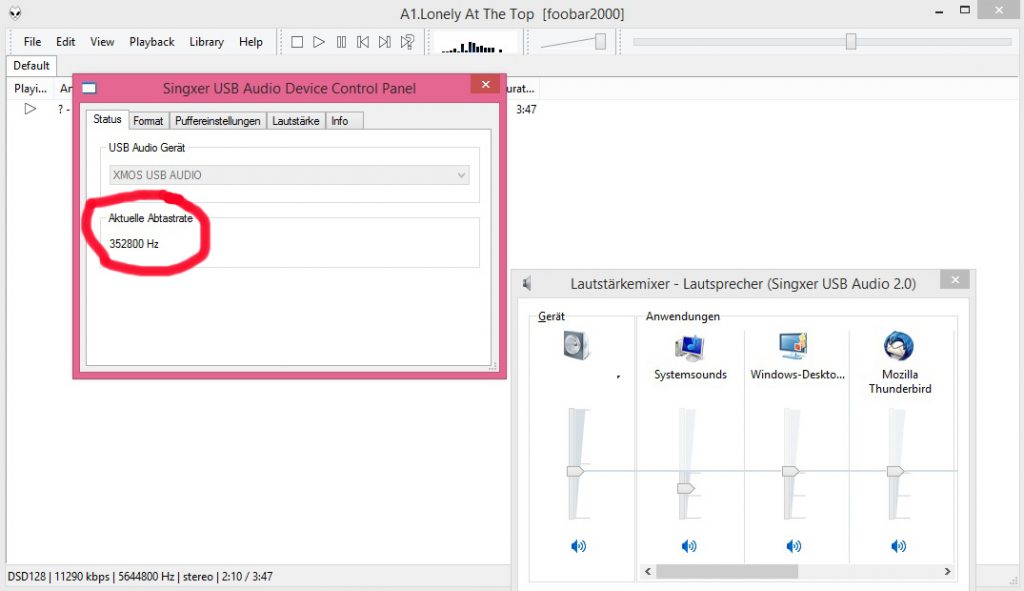 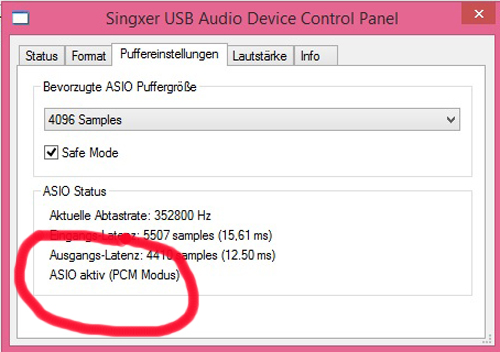 second, first musical impressions: relatively „dry“, very low latencies i guess..have to hear here more..(but it could be more in another „league“ (DSD vs PCM))..
so, third, i fiddled a little bit around and here are now the settings which worked for me: (there could be other possibilities/ways as said) 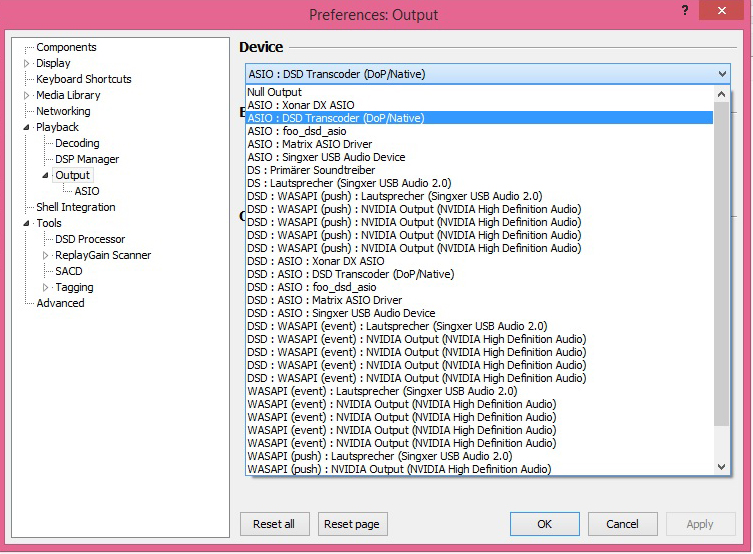 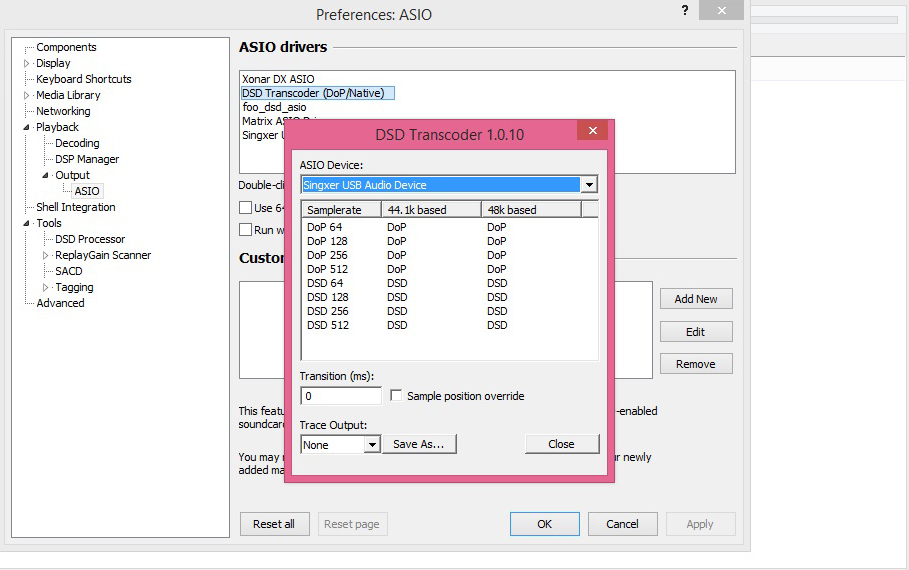 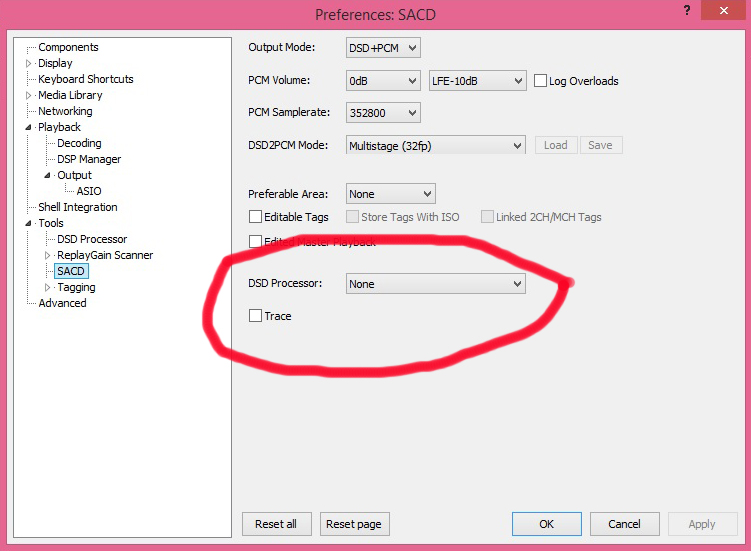 as said, there could be other possibilities too but for me its enough for now and, as said, 2 strange things: The ASIO-Singxer-USB-Audio component works and DSD-Soundprocessor on „off“ too..(but the latter could be a little bug)..
so, and now it works here really great 😉 ..this DoP/DSD-nativ-thing is sometimes really in a different league (but that really depends on your DSD-material too)

so, 😉
thx to „Krunoslav“ again, he sent us some new driver (V4.38 from matrix-digi.com) to test perfect bitstreaming via wasapi under Win8.1+Foobar+Skysong(Singxer)-XMOS-USB-bridge+ES9038Q2M->see comments->http://essabre-90xx-rpi.sfb2.com/2018/02/es9038q2m-es9018k2m-dsd-perfect-bitstreaming-win8-foobar2000/#comment-50..
unfortunately it doesnt work here for me but i will upload it to the forum anyway (LINK)..but be careful i had here very great problems with my antivir..
but curiously after installing my buffer-/“stuttering“-problems with files above 16/44,1 (now here in 24/192 no problems) with the Skysong(Singxer)-XMOS-USB-bridge+ES9038Q2M (via I2S) are gown away 😉 ..

but still these new ES9038Q2M (in any case the pcb i have here->the „blue“ one) sounds for me still like plate/sheet..(„old problem“->we still have to evaluate if its a „shitty“ pcb/components and if the „green“ ones sound better).. 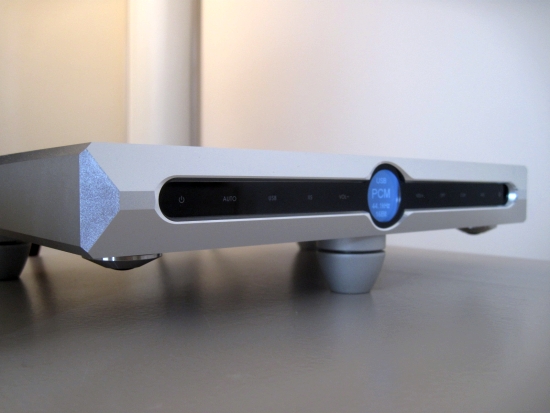 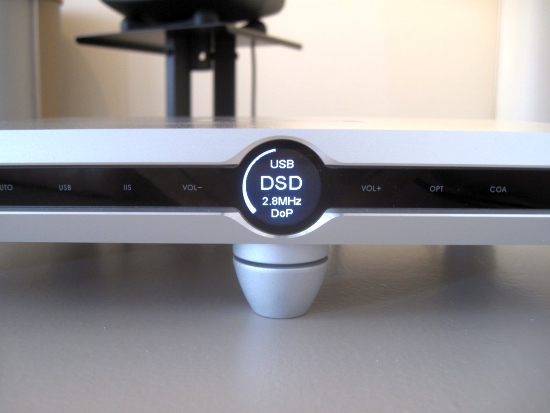